ONS meeting with Sikhs nothing but a sorry affair

On Monday evening representatives from the NSO participated in an Office for National Statistics (ONS) meeting in London regarding the Sikh Federation UK’s ongoing lobbying for the inclusion of a Sikh ‘ethnic’ tick box in the 2021 census.

At the start of Monday’s discussion, our Director Lord Singh asked the ONS if they had taken into consideration Sikh teachings, and specifically the edict of Guru Nanak who rejected the labeling of individuals on caste, ethnic, race or any other lines of perceived difference. Sikh teachings emphasise the equality of all human beings. Lord Singh provided a robust Q&A on ‘Sikhs and ethnicity’ to the ONS at the meeting, which can be read here.

During the event another NSO delegate raised the issue of evidence-based research on South Asians (Indians, Pakistanis, Bangladeshis and Sri Lankans) that shows they are at more risk of strokes and heart attacks. He said healthcare professionals offer advice on lifestyle modification and prophylactic therapies, and ethnicity is an important risk factor for them to consider. We take the view that in such cases involving cardiovascular risk, it would be irresponsible and furthermore dangerous to deny one’s Indian heritage. The risk factor for a Sikh convert of Caucasian heritage would of course be different. We are confident the ONS will take this into consideration.

After careful deliberation, we’ve decided to speak out about some further concerns. In short, we were taken aback by the conduct of some of the delegates at the meeting. Amrik Singh, Chair of the Sikh Federation UK openly boasted that his organisation had previously sued the ONS, spending £10,000 in doing so. He did not however clarify the outcome of the litigation. After the event, some delegates (who have chosen to remain anonymous) informed us how the meeting environment had made them feel intimidated. One was aggressively told to ‘shut up’ in Punjabi. We are aware that some individuals subsequently flagged concerns with the organisers. Regrettably, our Director was also heckled and jeered for simply putting forward his point on Guru Nanak’s teachings.

Embarrassingly others accused the ONS of being like some kind of modern day extension of the British Empire, and playing ‘divide and rule’. An attendee told The Sikh Council supremo Gurmel Kandola to leave the room for not respecting the meeting format. Another supporting the Sikh ‘ethnic’ tick box proposal, oddly suggested that the whole idea of Sikhism as a great world religion was an invention of the British. There appeared to be significant numbers of Sikh Federation supporters at the meeting, but regrettably very few Sikh women. We would like to take the opportunity to commend the ONS for their patience, expert facilitation and professionalism at an event fraught with difficulty and tension from the outset. They themselves faced significant vitriol from some of those present.

Importantly, the ONS shared their own quantitative research on the Sikh ‘ethnic group’ question, which was conducted with Sikhs in both Hounslow and Wolverhampton this year. These areas were chosen because of their sizeable Sikh communities. Summarising their findings the ONS concluded, there was no indication that the inclusion of the proposed box ‘provides any additional information over the religious question about the Sikh population’. Moreover they said the research, ‘indicated that the religious affiliation question better captures the size of the Sikh population’. 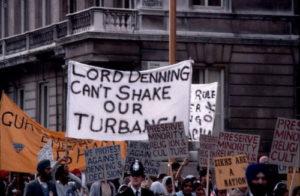 Q: What is ethnicity and why is it important?

A: Ethnicity refers to shared hereditary characteristics like environment, culture, religion, diet etc. Some of these factors are reflected in our DNA and the degree to which people from different cultures in different parts of the world are affected by certain diseases and ailments. For example, people from the West Indies are more prone to sickle cell anaemia. People from Punjab are more likely to suffer from heart and liver disease than people in the West.

Identifying ethnicity is particularly helpful in the planning of medical services to meet the needs of immigrants from different parts of the world.

Q: What is the link between ethnicity and religion?

A: Religion is considered relevant to ethnicity because those sharing a religion in a particular part of the world, often share a common diet and lifestyle.

Q: What was the Mandla Case and why is it sometimes mentioned in Sikh discussions on ethnicity.

A: The then Commission for Racial Equality (CRE) wanted to try to prove that Sikhs were a race. In a meeting in my house with representatives of Bindman and Partners (solicitors for the CRE), the Barrister Harjit Singh and myself, I advised against the use of race as the concept of different races was against Sikh teachings, which emphasise we are all members of one human race. Instead we agreed to go for the less rigid concept ethnicity, on the grounds that most Sikhs in the UK at the time came were born in the Punjab, spoke Punjabi as their first language, shared Punjabi culture and common diet.

The case went up to the House of Lords where the Judges ruled that for the purpose of protection against discrimination, we could be considered an ethnic group.

Q: Does this mean that Sikhs are a distinct ethnic Group?

A:  No. It simply means that Sikhs from any part of the world, including converts of any ethnicity, are entitled to protection against discrimination while in the UK as if they were a distinct ethnic group. We still retain the ethnicity with which we were born. Our DNA and susceptibility or relative immunity to some diseases cannot be changed by legislation.

Q: Are there any advantages in writing ‘Sikh’ in the ethnic tick box?

A: It is claimed that monitoring will result in improved opportunities in employment and in the provision of services to the Sikh community. In reality, ethnic monitoring can only provide a broad snapshot of relative disadvantage. There is no evidence of any community actually benefitting from ethnic monitoring. On the other hand there is clear evidence of Jews and Muslims using political lobbying to enhance their position.

Q: Are there any disadvantages in writing ‘Sikh’ in the ethnic tick box.

A: Yes. Firstly, If a large employer, like the BBC were monitored to see if they were employing an acceptable quota of Sikhs, it might be shown that they were employing an acceptable number of ‘supposed ethnic Sikhs’. It would not reveal any discrimination against visible identity Sikhs. It should be remembered that the Mandla Case was fought to protect Sikh identity. Practicing Sikhs and non-practicing Sikhs would be seen as one and the same.

A: Of course. As Sikhs we should be committed to protecting all people against discrimination, religious or otherwise. However, in reality, Sikhs without a visible identity, suffer no more discrimination than say, Hindus and Muslims. We should not compromise the Gurus’s teachings to give additional protection to those not committed to Sikh teachings.

Q: Why do you feel strongly against Sikhs calling themselves an ethnic group.

A: In the 60s I saw a Daily Telegraph crossword with a clue-4 letters; a Punjabi Hindu, The answer the next day was ‘Sikh’. In schools nothing was known about Sikh teachings and we were described as martial race or tribe. Hindu leaders insisted that Sikhs were simply a sub-set of Hindus.

Some of us worked hard to show that the uplifting teachings of our Gurus constituted a distinct religion that in its tolerance and respect for different beliefs had much to offer today’s world. Through broadcasts and the media, in interfaith meetings and in lectures across the world, including the Vatican, and in discussions on the school curriculum, we managed to get Sikhism recognised as one of the six major religions of the world.

Sikhs in the UK, Canada and many parts of the world are competing successfully without ethnic monitoring. It is sad to see some people, for questionable motives trying to reduce us to some sort of ethnic tribe to be monitored and counted like some sort of endangered species.

Sikhs should focus on trying to ensure that all Sikhs enter ‘Sikh’ in the religious tick box with pride in our Guru given identity. 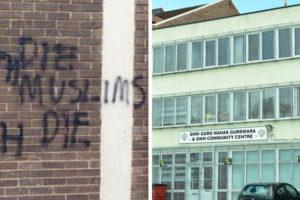 A House of Lords debate on the government’s definition of Islamophobia was heard earlier this week following a question tabled by Baroness Warsi. In response to the question, which asked the government whether they had a working definition of Islamophobia, Lord Bourne confirmed the government did not endorse any one particular definition
He said previous attempts to define Islamophobia hadn’t ended in consensus amongst community groups. Pressing further, Baroness Warsi asked the Minister if he was in agreement that hate cannot be ‘fundamentally’ challenged unless the prejudice that underpins it is properly defined.

Agreeing with the thrust of her question, Lord Singh said: ‘Lady Warsi, has rightly drawn our attention to the vagueness of the term Islamophobia. I add a point that concerns me: the culture of victimhood that it can easily lead to, which is not very healthy.’

’Making reference to research conducted by the NSO, he went on: ‘There is also the way in which figures for crimes against other people are included in the statistics for Islamophobia—up to one-third, according to a freedom of information requests. But the greatest concern is that this sort of thing does not really tackle the underlying issue of hate crime, which arises out of ignorance and prejudice. It is there at all levels of society, and we are doing very little to combat it.’ 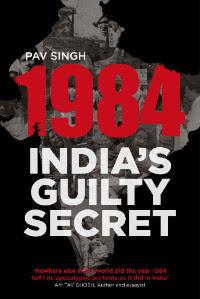 The Network of Sikh Organisations is delighted to be hosting the official launch of Pav Singh’s eagerly awaited book, 1984: India’s Guilty Secret (published by Kashi House) in the House of Lords on the evening of 1 Nov 2017.

The event was sold out within an hour of publicity and promises to be both engaging and thought provoking. The format will include a Q&A with the author, and will be hosted by our Director Lord Singh of Wimbledon.

The book can be purchased via link below: