A hundred years on: paying respect to the fallen of Jallianwala Bagh 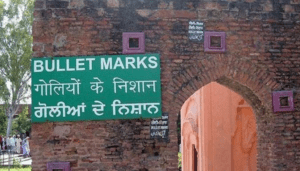 This 13th April 1919 marks the centenary of the Jallianwala Bagh massacre in Amritsar. Thousands of peaceful protestors were gunned down following orders by Brigadier General Reginald Dyer, many unaware martial law had been imposed and came to Amritsar to celebrate Vaisakhi. The officially declared death toll was 379 civilians which included men, women and children and over a thousand were injured.

The NSO encourages UK gurdwaras to hold a minute silence this Saturday after the ardas at midday, to remember those who lost their lives in this tragedy described by Churchill as ‘monstrous’ and which former PM Tony Blair said, ‘reminds us of the worst aspects of colonialism.’

Lord Singh, the NSO’s Director said, ‘I strongly urge all Sikhs everywhere to visit their gurdwaras and observe a minute’s silence at midday 13 April 2019 to remember and honour the hundreds of innocent victims mercilessly gunned down in cold blood by British soldiers. The incident made the demand for independence unstoppable.’