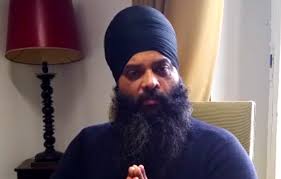 Paramjeet Singh fled from arbitrary arrest and torture in India in 1999, and in the following year was granted indefinite leave to remain in the UK after a finding of a justifiable fear of persecution if he was made to return to India.

Paramjeet is married and is the father of 4 children age 7 to 11. In December 2015 the family went on a short Christmas holiday to Portugal where he was arrested by Interpol at the request of the Indian government and is now facing extradition proceedings for his forced return to India. It seems that the Indian government had taken exception to his speaking out on human rights abuse in India. Lord Singh, for the NSO, has raised his concerns with the Minister for the Foreign and Commonwealth Office and other Sikh groups have also raised concerns with both British and Portuguese governments.

In an interview on 3rd January 2015 with a Portuguese television channel outside the House of Lords, Lord Singh was asked why had Paramjeet Singh after being granted asylum, continued to attack India’s attitude to human rights instead of simply getting on with his own life.

Lord Singh responded that we all have a responsibility to condemn the ill treatment of others, and for Sikhs this responsibility is embedded in religious teachings and is obligatory.

He appealed to the authorities in Portugal not to be used like pawns in a backdoor attempt by Indian authorities to silence criticism of their human rights record, and return Paramjeet to British jurisdiction.