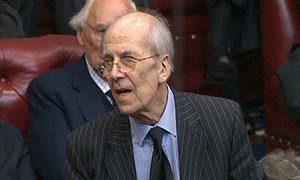 Lord Tebbit has expressed his admiration for Sikhs in a debate in which he said the community had demonstrated “great loyalty” to Britain.

The former Chairman of the Conservative Party said:

He went on: “We should all remember that there are very few places where one can feel safer in the face of extremism in this country than in the company of a large number of Sikhs, who have always shown by their great loyalty and understanding of this society that they have their place here”.

Lord Tebbit’s comments follow a question tabled by Lord Singh, asking the government for more clarity on the meaning of words in the battle against extremism.

The NSO’s Director asked Her Majesty’s government: “What assessment they have made of whether action to combat the threat of terrorism could be helped by a clearer use of language, for example by explaining the actual meaning of words such as “extremism”, “radicalisation” and “fundamentalism”.”

Minister Lord Ahmad responded describing the Prevent programme, and efforts to train front line staff in spotting “signs of radicalisation”. He said the government had published its counter extremism strategy and was working with communities to tackle the threat of extremism.

Lord Singh responded: “I thank the Minister for the reply explaining the Government’s position. However, for years we have had a Prevent programme, as he mentioned, without clearly defining what we are trying to prevent. Words such as “radical”, “deradicalise”, “fundamentalist” and “extremist” are totally devoid of meaning, while the terms “political Islam” and “Islamist” are considered by many Muslims to be derogatory to Islam.

He added: “Does the Minister agree that what we are really trying to prevent is the out-of-context use of religious texts that advocate the killing or ill-treatment of people of other faiths? Furthermore, does the Minister agree that to suggest that such behaviour is sanctioned by the one God of us all is the ultimate blasphemy? Finally, will the Government help Muslim leaders to present Islam in the context of today’s society?”