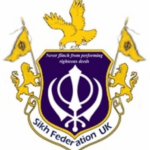 The SFUK in their continuing efforts to smear those that are trying to protect Sikh symbols and identity, while speaking and writing about the uplifting teachings of our Gurus, are again underlining their anti-Sikh agenda.