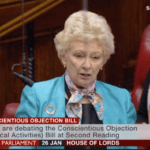 Our Director Lord Singh has supported a Bill designed to afford necessary protection for careers of medical practitioners who choose to object on grounds of conscientious objection when it comes to matters of life and death such as assisted suicide.

The Conscientious Objection (Medical Activities) Bill introduced by Baroness O’Loan had its second reading in the House of Lords last week. According to Baroness O’Loan the Bill ‘seeks to affirm as a matter of statute that nobody shall be under any duty to participate in activities they believe to take a human life. That means either in the withdrawal of life-sustaining treatment, or in any activity authorised by the 1967 and 1990 Acts (including activity required to prepare for, support or perform them).’ Baroness O’Loan believes such reform would re-establish legal protections for medical conscientious objectors, reaffirming Article 9 rights.

‘My Lords, I support this important Bill. It is a timely recognition of the importance of conscience and ethical belief in looking at the end-of-life decisions, and the increasingly complex issues and personal dilemmas, that many face in their daily lives. Speaking from a Sikh perspective, I fully support the Bill’s sentiments as well as its aims and objectives. Majority opinion can, at times, be unthinking and we need to be wary of being pushed, or pushing others, to support debatable attitudes that at times affront ethical and moral principles.

This year, as has been mentioned, while commemorating the centenary of the end of the carnage of World War I, we should pause and reflect that it was also a war in which conscientious objectors were ​brutally treated—or even shot—for their belief that it is wrong to kill.’

He went on: ‘Something of the same dilemma was faced by Sikh soldiers when the Indian army attacked the Golden Temple in Amritsar in 1984. This attack on the holiest of Sikh shrines, on one of the holiest days in the Sikh calendar, was clearly political. Soldiers were ordered to shoot innocent pilgrims. Not surprisingly, some Sikh soldiers refused and were accused of mutiny. Some were shot, others were cashiered out of the army and some were to spend years in prison. They were accused of treason and disloyalty to their oath of allegiance to the state. True, yet in refusing to shoot non-combatants they were being true to the ethical teachings of their religion. This requirement to be true to our conscience is embedded in Sikh scriptures.

Guru Ram Dass, the fourth Guru of the Sikhs wrote:

Lord Singh continued: ‘In the Nuremberg trials at the end of the Second World War, many Germans accused of war crimes against the Jews and others pleaded that they were duty bound to follow orders, however questionable. The court held that the requirements of any state were secondary to the overriding norms of civilised behaviour.

Rapid advances in the field of medicine and today’s increasing tendency to overfocus on the rights of an individual can easily lead us to ignore the rights of wider society, and the ethical dilemmas that sometimes questionable procedures pose for those immediately involved. The downside of what we do is not always immediately apparent. The initial, clearly limited and humane objectives of the Abortion Act 1967 have, over time, been largely ignored. Abortion has become contrary to the original intentions of the Act and the ethical teachings of most religions and beliefs. It has simply become another method of birth control. We must have the right to object and to not take part in what we consider to be the unnecessary taking of human life.

The Human Fertilisation and Embryology Act 1990, which legalised embryo- destructive forms of research, the rapid expansion in molecular biology and new genetic modification techniques can impinge on deeply held ethical beliefs, and people should not be compelled to do anything that they believe is contrary to respect for life. While conscience clauses were included in the initial legislation, they have been continually eroded by social pressures to conform. Those involved in procedures that impact on sincerely held ethical beliefs must be given the right to opt out.

The need to respect conscience goes beyond the field of medicine. Yesterday, I was invited by the DfE to give a Sikh perspective on relationship teaching in schools. As a Sikh, I am appalled at the undue emphasis on sexual relationships and sexual identity currently being taught in school. Young children are led to question their gender and are unhelpfully offered support to make permanent potential differences, which are generally passing phases in growing up. Parents and teachers should have a right to question or opt out of such teachings.

Today we should heed the words of the great philosopher James Russell Lowell who wrote:​
“We owe allegiance to the State; but deeper, truer, more
To the sympathies that God has set within our spirits core”.
This Bill is timely, well considered and necessary. I give it my full support.’

The Bill will now pass on to a committee stage in the House of Lords.