As faith representatives, we support the ongoing efforts of Sarah Champion MP who has asked the government to take further steps in tackling the issue of child sexual exploitation. A recent letter coordinated by Champion dated 25 May 2018, and co-signed by a group of 20 cross party politicians requests the Home Secretary and Minister for Children and Families to do more for the victims of Britain’s sexual grooming gang epidemic.[1]

The cross party group have requested the Home Secretary pays heed to the 2015 report Tackling Child Sexual Exploitation,[2] and have asked the government to commission research into better understanding the ‘operation and motivation’ and ‘drivers’ behind sexual grooming gangs. We believe this is important, however we also believe some aspects of the ‘motivation’ and ‘drivers’ behind sexual grooming/child rape gangs are already abundantly clear.

Firstly earlier this year, a survivor of these rape gangs has confirmed she was targeted for being a ‘white slag’, because she was ‘non-Muslim’.[3] Judges like Gerald Clifton who sentenced men in Rochdale in 2012, made a similar observation in sentencing remarks. He said the Muslim men had targeted their victims because they were not part of the offenders’ ‘community or religion.’[4] A (2017) report from counter-extremist think tank Quilliam looked at 58 grooming gang cases since 2005, and found 84% were ‘Asian’, of which the majority were comprised of men ‘of Pakistani origin, with Muslim heritage.’[5]

This analysis was preceded by the Jay report into Rotherham (2014), which concluded, ‘agencies should acknowledge the suspected model of localised grooming of young white girls by men of Pakistani heritage, instead of being inhibited by the fear of affecting community relations.’[6] The report concluded an estimated 1,400 children, (mainly white girls) had been abused by predominantly British Pakistani men. Muslim girls are rarely targeted, and despite authorities failing to recognise the phenomenon, Sikh and Hindu communities have been complaining about ‘grooming’ since the 1980s.

We as faith communities want the government to do the right thing and call out the motivation for the majority of sexual grooming gangs for what it is. We believe the evidence overwhelmingly points to an inconvenient truth. That is: non-Muslim girls (this includes Sikh, Hindu and Christian girls) have been systematically targeted in Britain due to a form of religiously motivated hate. We must have the courage to face the reality if we are serious about finding a solution to Britain’s sexual grooming gang epidemic. We support Baroness Warsi’s brave stance when she said, “a small minority” of Pakistani men see white girls as “fair game”,[7] and ask the government to help the Muslim community tackle this stain on an otherwise law-abiding community, with appropriate funding if necessary. 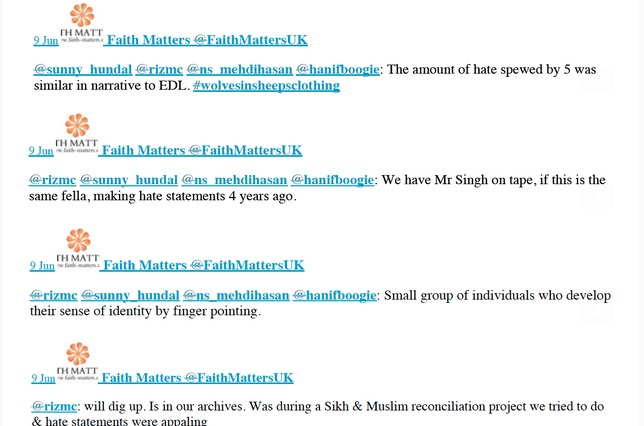