Why reducing reoffending rates must be an objective for prison chaplains 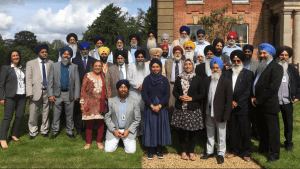 Our charity is proud to be run the Sikh Prison Chaplaincy Service and we provide both spiritual and pastoral care for all Sikhs in prison in the United Kingdom.

One of the areas in which we’d like to see more emphasis is in prison chaplaincy initiatives to help reduce reoffending rates. It’s a no brainer that if we can keep Sikhs who’ve been in prison, out of prison – that can only be for the betterment of the community, and wider society at large. Of course, once ex-offenders are out, there must also be opportunity to encourage them back into work, motivate them to contribute positively to their community and reengage with broader society as responsible citizens. Indeed, we believe gurdwaras, not just the National Probation Service or multiagency management have an important role to play in this regard.

In a House of Lords debate on prisons and radicalisation, our Director Lord Singh of Wimbledon highlighted the importance of reducing reoffending and our desire to reduce this for Sikhs.

He said: ‘I declare my interest as director of the Sikh Prison Chaplaincy Service. Does the Minister agree that chaplains must be at the forefront of any move to tackle radicalisation in prisons? To do this, they have to place dated social and political norms embedded in religious texts in the context of today’s times.’

He went on: ‘Will the Minister agree to meet me to discuss Sikh chaplaincy initiatives to do this and reduce reoffending rates, and how this experience might possibly be used to the benefit of other faiths?’

The NSO believes that a measure of the success of a positive, effective and engaged prison chaplaincy service must surely be a reduction in reoffending rates.

We will be following up to discuss this with the government and believe this aim should extend to prison chaplaincy services for all faiths and none.

The event was organised in Partnership with Prison Service Chaplaincy HQ.

It was held under the leadership of Lord Singh, the NSO’s Director and Mike Kavanagh the Chaplain-General of Prisons.

Although the work of The Sikh Chaplaincy Service often goes unnoticed, The NSO is proud of their on-going commitment and contribution to the community.

A BRIEF HISTORY: SIKH PRISON CHAPLAINCY IN THE UK

One of the first Sikh Prisoners in British jails was Shahid Udham Singh, a friend of my parents. Udham Singh was hanged in Pentonville prison in 1940 for shooting Sir Michael O’Dwyer at a meeting in Caxton Hall, London. O’ Dwyer was Governor of Punjab at the time of the infamous Jallianwala Bagh massacre. He was regularly visited in prison by my father Dr Diwan Singh who would travel up from Birmingham.

In the 60s and 70s the hippy movement was in full swing and long hair became fashionable. Restrictions on long hair in prisons led to a problem for the Church of England (CoE) Chaplaincy, with some inmates claiming that they were Sikhs and should be exempt from the requirement to keep their hair short.

Although the law stated that it was a wholly Church of England Chaplaincy, there was some provisions for other Christian denominations and for Jews.   With some people now calling themselves Sikhs, the Chaplain General realised that he needed guidance on other faiths. He invited myself and a Muslim from the Regent’s Park Mosque to join us at the quarterly Chaplaincy Council meetings. (A few years later we were joined by a Hindu and a Buddhist).

The meetings were conducted around a long table and we were made to sit at one end while the agenda was being discussed at the other end. If we raised any issue or concern, the Chaplain General would look at us in a hostile way. Fortunately we both had thick skins!

By the middle of the 80s, the number of Sikhs in prison had increased significantly from a handful to nearly 300 (now more nearly 800) mainly due to political agitation connected with the attack on the Golden Temple and the mass killing of Sikhs throughout India in 1984.

I felt every Sikh in prison should receive regular visits and support. I persuaded a few friends around the country to act as contact points or Regional Managers and it was their duty to find granthis or other retired people to visit prisons in their area. Much later, and with great difficulty, I got agreement from the Chaplaincy Council for the Sikh Chaplains to be paid for travelling and attendance time.

There were many battles with the Chaplaincy Council over bringing in Krah Prashad and occasional langar for Sikh Services, and over the right of Sikhs to wear karas and a turban, and for Sikh Ministers to wear a kirpan. Eventually it was agreed that a kirpan of up to six inches in length, could be worn by the Sikh minister providing it was concealed from view.

Respect for other faiths improved considerably with the appointment of a new Chaplain General, William Noblett in the 90s. He had lived in India and had a great regard for Sikhs. On our first meeting he greeted me with Sat Siri Akal and a big smile. William was determined to change the Anglican Chaplaincy to a Multi Faith Chaplaincy.

For the first time we were invited to the Annual Chaplaincy Conference with the designation of Faith Advisors. Additionally, we were allowed a Sikh Training Day. We also began having Sikh Chaplaincy meetings at our own expense. The Home Office gave each Other Faith Chaplaincy a small annual grant, currently £17,000 (less than the cost of a part-time secretary) to manage spiritual and pastoral care for every Sikh in every prison and young offenders institution in the whole of England and Wales. The grant helps pay a small part of the office and administrative expenses, with the Director, Deputy Director and Regional Managers all working without payment. Sikhs are now ahead of other chaplaincies in also extending chaplaincy services to Scotland, with the help of resources from the Network of Sikh Organisations (NSO).

Much has been achieved with the recognition of special provision for religious festivals. We have also compiled Prison Service Instructions (PSIs) giving an outline of the Sikh faith and faith requirements. Another area of progress is that we now have three full-time and one part-time salaried Sikh chaplains.

Progress has not however been uniform. The Prison Chaplaincy is only advisory and is not a part of the management structure of the Prison Service. When a Sikh Minister at one prison was summarily dismissed, I was told I could not be given the reason because I was not a paid employee! I upset the new Chaplain General by appealing to the Head of the Prison Service who finally condescended to tell me that the Minister’s kirpan had fall loose and he was seen picking it up from the floor. He, like all other Sikh Chaplains at the time and most still now, was a ‘Sessional Chaplain’ paid only for the hours he worked with no employment rights of appeal.

There have also been some self-created problems. There was a court appearance with a Sikh prisoner threatening to go on a hunger strike for special facilities. I attended court to assist him and saw him being slipped a packet of cigarettes by a friend. There are warnings not to bring in food from outside. Despite this, a well-meaning chaplain inadvertently brought in drugs laced samosas. Another Sikh Chaplain was caught smuggling drugs in his turban.

We have worked to ensure that the Sikh Chaplaincy PSI contains accurate information on Sikh dietary requirements in accordance with the teachings of the Gurus and the Sikh Reyat Maryada. The PSI, in line with the Sikh Reyat Maryada, explains that Sikhs do not eat halal but other than this the eating of meat or vegetarianism is an individual choice. The PSI also explains that many Sikhs will not eat beef and a fewer number will not eat pork.

Pressure from the significantly more numerous Muslim inmates has led to the frequent serving of halal meals. Patient negotiation with the Head of Prison Catering with veiled threats of resorting to Equalities legislation has resulted in an acceptance that if halal meat is provided, there must also be a non-halal meat option; something sadly still not yet achieved in schools and public services catering.

Whereas langar used to be brought in from gurdwaras, the official prison line now is that it must be prepared in-house to meet health and safety requirements for which they are ultimately responsible. They have agreed that this can be done by the Sikh prisoners or under the supervision of Sikhs. Some prisons however, still raise no objection to langar being brought in from outside. Some Sikhs are vegans and we work with prison catering to accommodate their needs.

More recently, a member of a Sikh sect says that he will not eat food cooked or served by those outside his sect, including the sharing of krah prashad. He also insists that he can only eat food cooked and eaten in an iron vessel. Unfortunately some outside members of his sect claim that this amounts to religious discrimination, misquoting Gurbani and the Reyat Maryada to justify an exclusiveness that goes against the whole thrust of Sikh teachings on equality. We have managed to help this individual by securing an iron bowl and spoon and a supply of cereals and he is happy with this. While we will continue to help, we are not prepared to bend Sikh teachings as some would like. One Sikh website has suggested that ‘Lord Singh has refused to support an Amritdhari Gursikh in practicing Sikh teachings.’ The same website declined to publish a reply and an offer to discuss the issue on any Sikh TV channel.

There are still many other challenges. The main language now spoken by Sikh prisoners is English, with many Sikhs (mostly non-practising) being sent to prison for drink and drugs offences and crimes of passion. Some Sikh chaplains still have a poor command of English, and there is a need for more focussed recruitment. Some Managing Chaplains who are all non-Sikhs, to save money, try to pressurise Sikh Ministers to forgo their statutory weekly visit and come in fortnightly or once a month. We believe this is unfair to Sikh prisoners and are working to stop this. We are also pressing for Sikh chaplains to be accorded the same hours for religious teaching and prison duties as is given to those of the Christian and Muslim faiths.

I am concerned at the growing number of educated young Sikhs who seem to believe that they are doing their bit by looking for faults in the work being done by others trying to live our Gurus’ teachings. My message is emulate, and hopefully surpass their work, for the benefit of our community.

In conclusion, I would like to express my grateful thanks to the Sikh Chaplaincy team, particularly to Honorary Deputy Director Inder Singh Chawla, Gagandeep Singh Recruitment and Training Manager, and all the Regional managers and chaplains for their unstinted and selfless support in this important seva to vulnerable members of our community. Thanks to their enthusiastic efforts, and that of all Sikh chaplains, hundreds of Sikhs have now turned their lives around and are making a valued contribution to society.