There is one thing that unites all Sikhs around the world irrespective of the status of their personal spiritual journey or background – that is the primacy of the Sri Guru Granth Sahib (SGGS) – the eternal Guru of the Sikhs and Guru Gobind Singh’s clear edict ‘Guru Manyeo Granth’, which recognises the Guru Granth Sahib as the only eternal Guru. But there are insidious forces at play – some with allegiance to Hindutva, who are looking to tarnish, distort and pervert the foundations of our great world religion.

Another iteration of this presented itself at the beginning of the month. On 1st September 2020, the Delhi Gurdwara Parbandakh Committee (DGPC) sanctioned discourses from the so called Dasam Granth (DG) to be read from the gurdwara. This action is a direct challenge to the primacy of SGGS. Following protests, we understand the DGPC have said this won’t happen again, but whether or not this is the case remains to be seen. As previously discussed, the authorship of parts of the DG is a matter of significant dispute. When the Sikh Rehat Maryada (SRM) was compiled in the 1940s, highly respected scholars at the time discarded the majority of the DG writings, which could not be attributed to Guru Gobind Singh. Some of these included amorphous and pornographic exploits of Hindu Gods and Goddesses, as well as misogyny and the denigration of women.

The DGPC should be ashamed of their decision to let this go ahead and we support the efforts of the Malaysian Gurudwara Council in their letter to the Akal Takht (pdf below) to take action against this flouting of the SRM. Although these events are in India, there are groups in the UK who are promoting this anti-Sikh agenda and we have pointed to this in the past. In 2018 there was the case of Amrik Singh Chandigarh – a preacher who promotes the primacy of SGGS, who was attacked by thugs associated with a sect called the Taksal. Sadly, the gurdwara committee in Southall where the incident took place did not condemn the thuggery, and at one point perversely sided with the Taksali bully boys. Another respected Sikh, is still have physiotherapy to this day, having been violently attacked over a decade ago by unsavoury elements in our midst.

All Sikh groups must openly challenge this kinds of behavior.

Sadly, groups like the tick box obsessed Sikh Federation UK (SFUK) previously failed to condemn the attack on Amrik Singh Chandigarh. We now ask them to join us in condemning the actions of the DGPC and their disregard for the SRM.

We note that in May 2019 the SFUK published a tweet which read:

Although we understand from sources that the DGPC have promised protesters that the insult to Sikh teachings won’t happen again, all British Sikh groups should unequivocally condemn the course of action originally taken by them.

This includes The SFUK, Sikh Council UK, The Sikh Assembly and City Sikhs.

On Tuesday the 12th November Sikhs worldwide will be marking the 550th birth anniversary of Guru Nanak the founder of Sikhism. Sikhism is a world religion dedicated to the promotion of compassion, equality and tolerance between different faiths and beliefs.

Sadly, on this very day of celebration where Sikhs and non-Sikhs will be marking a significant day in human history, the fringe Sikh Federation UK (SFUK) have a judicial review listed in the High Court challenging the ONS’s decision not to include a Sikh ‘ethnic’ tick box in the next Census.

Religion is already an option for Sikhs in the Census, and we maintain the ONS made the right decision – it is an absurdity to suggest Sikhs are an ethnicity. SFUK and their ally Preet Gill wrongly suggest Sikhs are an ‘ethnic’ group, rather than the religion founded by Guru Nanak, and one which is open to all regardless of ethnicity, colour or background.

Worst still, the SFUK are asking others to demonstrate ‘against continued discrimination’ outside the High Court on Guru Nanak’s 550th birth anniversary. What a way to commemorate the birth anniversary of someone opposing artificial factional divisions. 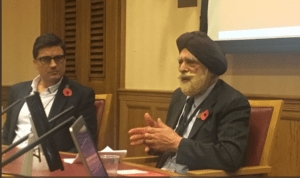 Following the 2014 disclosures from The National Archives under the 30-year rule, there are two things clear about the Thatcher government’s role in events leading up to the storming of the Golden Temple in 1984. Firstly, the then government dispatched an SAS officer to provide military advice to the Indian Army in the run up to the attack in Amritsar (codenamed Operation Blue Star). Secondly, the British dispensed with human rights in order to secure lucrative military contracts with India, in particular the Westland helicopter deal. We believe there is little more to be gained from a full public inquiry into the Thatcher government’s role into 1984. We already know Sikhs were betrayed for financial gain, because trade trumped human rights. The real focus must surely be justice for the victims, by lobbying for a UN-led inquiry into human rights violations by the then Indian government, on similar lines to one supported by Britain for Sri Lanka’s massacre of Tamils. Why are groups like the Sikh Federation (SFUK) aiming for the wrong target?

Chronology of events and background

Following the 2014 disclosures David Cameron instructed Cabinet Secretary Sir Jeremy Heywood to conduct an internal government review of documents related to British involvement in the run up to Operation Blue Star. After the Heywood review, Lord Singh was invited to meet the Cabinet Secretary on 21 January 2014. He explained the hurt and sense of betrayal felt by UK Sikhs over the revelations of British government involvement. The Cabinet Secretary’s response was that his task was simply to look at all documentation and report accordingly.

When Lord Singh mentioned he’d seen documents showing the only concern of the then government seemed to be a lack of support for the Indian government might jeopardise arms exports, he received the astonishing response from the Cabinet Secretary that he and his team, ‘were unaware of any arms trade implications in the papers.’ Lord Singh responded that he had seen several references to arms sales to India being under threat, and at the Cabinet Secretary’s request, gave his office details of a Cabinet document dated, 22 November 1984, referring to a five billion pound arms contract.

Sir Jeremy Heywood was additionally informed that Lord Singh had met a former Cabinet member back in November 1984, to express concern over the UK government’s silence over the widespread organised killing of Sikhs throughout India. The staggering response was, ‘Indarjit, we know exactly what is going on, it’s very difficult; we’re walking on a tightrope: we have already lost one important contract’.

On 4 February 2014, Sikh representatives met Baroness Warsi. Prior to the meeting Gurmel Kandola (Sikh Council UK) contacted Lord Singh suggesting the NSO’s Director should lead on behalf of Sikhs. However, at the meeting, Kandola maneuvered himself into position of chair, ignoring Lord Singh throughout, but giving ample opportunity for others to speak. Lord Singh was forced to interject. He unequivocally criticised the Heywood review as a ‘whitewash’ and ‘a cover up job’. Warsi responded, ‘If that’s an argument I can fight.’ Others presents including the otherwise vocal Sikh Federation were remarkably silent. A Sikh present unhelpfully felt it necessary to tell Warsi he was planning to stand for election on the Lib Dem ticket; another oddly provided a totally unrelated history lesson on Amritsar’s shrines. In an undated letter following the meeting, Warsi writes: ‘on the allegations that the UK military advice was linked to defence sales, there is no information to suggest the UK, at any level, attempted to use the fact that military advice has been given on request to any commercial objective.’

Deeply unsatisfied with Warsi’s response Lord Singh tabled a debate on the 3 March 2014 in the House of Lords. Concluding his speech he said, ‘I urge the Government to add their support for an open, independent inquiry into the massacre or genocide of Sikhs in 1984 in the same way that they are backing a UN-led inquiry into the killing of Tamils in Sri Lanka. Against this, all offers of government assistance and offers to talk to Sikhs pale into an unnecessary distraction.’ Making no commitment to Lord Singh’s request, Baroness Warsi reiterated views expressed in her undated letter following the 4 February 2014 meeting – in short SAS advice was not given for commercial gain.

Later that month on 26 March 2014, during Prime Minister’s Questions, David Cameron was asked what more Britain could do to get justice for victims of 1984. He responded by saying the events in Amritsar continue to be a ‘deep source of pain to Sikhs everywhere’ and ‘a stain on the post-independence history of India.’ He went on, ‘The most important thing we can do in this country is celebrate the immense contribution that British Sikhs make to our country, to our armed forces, to our culture and to our business life and celebrate what they do for this country.’ It was this blanket dismissal of Sikh human rights, which led to the NSO’s decision to boycott the Downing Street Vaisakhi function that year. Unsurprisingly other’s shamefully attended for photo opportunities.

We have studied the SFUK’s recent report ‘Sacrificing Sikhs’, which was launched at the APPG for British Sikhs by Preet Gill MP on 1 November 2017. It provides a significant amount of detail from previously undisclosed papers, supporting what we already know about the then British government’s foreign policy agenda – that is trade with India trumped Sikh human rights. The author Phil Miller, who was commissioned by the SFUK, says the British government is yet to declassify documents relating to India after 1985. The SFUK are pushing for further disclosure, and a full inquiry into the then British government’s involvement. We see little point in lobbying for a full inquiry or disclosure of further documents. Here’s why: Lord Saville who chaired the ten-year Bloody Sunday Inquiry and sits with Lord Singh as a crossbencher, dismissed any further inquiry into the UK role as futile. He said thirty years of looking for further information would get us no further forward.

Justice for surviving victims and their families

We urge Sikhs to rather focus their attention on getting justice for the surviving victims and their families via a UN-led inquiry into human rights abuses of the then Indian government. This is achievable, as its already been done for Sri Lanka, and Britain had an important role in lobbying for a UNHRC probe into the massacre of Tamils. Those with vested interests in UK party politics will no doubt continue to lobby Theresa May’s government for a full inquiry into the Thatcher government’s role – but they are willfully misguided.

1.http://www.ohchr.org/EN/HRBodies/HRC/Pages/OISL.aspx
2. Operation Bluestar was the codename for the Indian Army’s assault on the Golden Temple complex in 1984
3. http://nsouk.co.uk/uk-government-involvement-in-the-attack-on-the-golden-temple-and-its-failure-to-respect-the-human-rights-of-sikhs-in-the-genocide-of-1984/
4. Letter on file addressed to Gurmel Kandola of Sikh Council UK from Baroness Warsi (intended to be distributed to all attendees of the 4th February 2014 meeting), was not disclosed to us for some time, and received by the NSO from a source other than the Sikh Council or Gurmel Kandola
5. https://hansard.parliament.uk/Lords/2014-03-03/debates/14030340000202/SikhCommunity#contribution-14030340000102
6. http://www.huffingtonpost.co.uk/2014/04/07/sikh-uk-vaisakhi-downing-_n_5102896.html